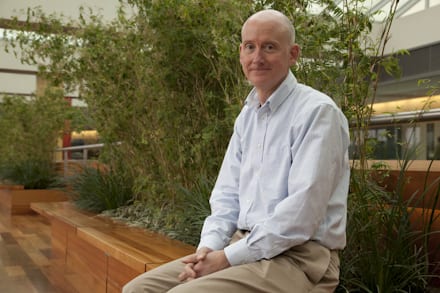 James Thomson’s scientific career started during his undergraduate years at the University of Illinois-Urbana Champaign under the mentorship of plant biologist Frederick Meins, who studied an obscure tobacco plant tumor called crown gall.

These plant tumor cells are capable of growing in an undifferentiated state essentially forever, yet if certain factors are added, they can sprout leaves, stems, and roots. Under the right conditions, they can even regrow a complete plant. Mein’s work with crown gall started with basic curiosity about its unique developmental properties, but it led directly to the creation of the world’s first transgenic plant, and to the revolution in agricultural practices that followed.

“I thought it was great Karma that tobacco plants get cancer, too,” jokes Thomson, “but more importantly, the work planted an early seed in my mind that would develop into the focus of my life’s work — studying the mammalian equivalent to those odd plant cells in mice, primates and ultimately humans.”

Thomson’s discoveries in human stem cell research at UW-Madison have redefined biomedicine, first with the isolation and culturing of human embryonic stem cells in 1998; then in the development of human pluripotent stem cells from adult skin cells in 2007. The discoveries led to two “Breakthrough of the Year” honors from the journal Science; cover-story coverage in Time magazine, which named him one of the “World’s 100 Most Influential People” in 2008; and receipt in 2011 of the Albany Medical Center Prize in Medicine and Biomedical Research, known as “America’s Nobel.”

“I think there are tremendous parallels between the early days of recombinant DNA research and the early days of human embryonic stem cell research,” Thomson says. “Both created a big social uproar over whether we should be doing this, followed by a compromise, then moving forward with the research.”

“My personal feeling is that people both underestimated how difficult it would be to develop their use in transplantation medicine, and seriously underestimated the importance of these cells as scientific tools,” Thomson says. “People are just now beginning human clinical trials based on human pluripotent stem cells, but Pharma is already using these cells in both drug discovery and drug safety assessment programs.”

For toxicity screens, stem cells should supplant animal testing relatively quickly, Thomson says. The goal will be to make such tests more accurate, safer and less expensive than animal tests, which will drastically reduce the numbers of animals needed in research.

“These human cells can not only be used to discover and test drugs, but can be used to assess the safety of any compound that comes in contact with the human body, including food additives, cosmetics, pesticides, or the thousands of household, industrial, and environmental compounds that bombard us every day,” Thomson adds. “Over time, all of these chemicals are going to be tested with human cells, and pluripotent stem cells gives us the ability to scale them up in the required industrial quantities.”

“When you think about any tissue engineering problem, the blood supply is common to them all,” Thomson says. “You need to have a blood supply that is vascularized and robustly connected to your existing blood supply, and that’s not trivial.”

“Also, when you look the major causes of death, in advanced countries most of them have something to do with blood vessels. Number one is heart disease. Number two is cancer, which requires a new blood supply to grow. Number three is stroke. Diabetes carries major complications related to blood vessels and Alzheimer’s is believed to have a connection to blood vessel dysfunction. Better understanding vasculature will impact the majority of reasons we die, and for this reason, vascular biology is becoming an increasingly important research focus for us.”

Thomson says we have virtually no knowledge of how the tens of thousands of chemicals in everyday use impact human development. This project could produce, for the first time, a high-throughput system for chemical screening that could target the chemicals that need more intensive study.

“One of our biggest goals is to develop a functional model for the blood-brain barrier,” Thomson says. “In the next couple years we want to actually perfuse the capillary system and produce a neural construct that will better mimic the brain.”

While the medical applications of stem cell research are exciting and are likely to continue, Thomson says it’s important to remember the applications all have their roots in fundamental research discoveries.

“The insights we are gaining on how the human body works are what ultimately will transform medicine,” he says. “With the access we now have to these basic cellular building blocks, we can for the first time begin to understand why certain cells fail to regenerate or die, which is the essential path for many debilitating diseases including Parkinson’s, diabetes and Alzheimer’s. Beyond transplantation therapies, we can begin to think about preventing the progression of disease at an early enough stage to improve the quality of life for many people.”

Without access to those cells, such a path of prevention would be a pipe dream.