Evolution is often thought of as something that happens gradually over hundreds or thousands of years. Recent studies on rapid evolution challenge this assumption.

Some species can show evolutionary changes after only a generation or two, particularly when facing environmental pressures.

Martin Bontrager, a graduate research assistant in the lab of UW-Madison zoologist Carol Lee, is studying the microbiome of copepods to better understand the organism’s ability to rapidly evolve.

The copepod is a very small aquatic crustacean, visible to the naked eye but typically only 1-2 millimeters long. Through its evolutionary history, the copepod has normally been a saltwater or estuarine water species. Within the last 100 years or so, it has been brought into freshwater reservoirs around the world via ship ballast water.

“The thinking is that any organism, like the copepod, is not just itself,” Bontrager says. “It’s also an ecosystem of hundreds or thousands of different bacterial species that are associated with it and all interact in some way.” 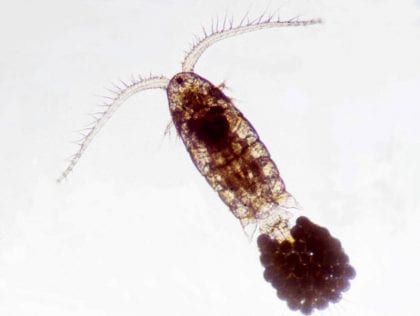 A female copepod with an egg sac. Image courtesy of Martin Bontrager.

When it comes to the human microbiome, studies have shown potential links between microbes and health outcomes, for example, gut bacteria and its role in obesity. It’s likely that the microbial community of the copepods also plays a role in their livelihood.

“That barrier from salt water to fresh water is a major evolutionary barrier that most species or taxa can’t cross ever,” says Bontrager. “How has this species been able to do it multiple times, so many times? That’s our major research question.”

Unlike many other invasive species, the copepod presents no obvious harm to the new ecosystem it inhabits; rather, it’s considered invasive because it has moved into new habitats where it had previously not been before.

Characterizing the microbial communities living in and around the copepods may play a part in answering how the copepods are capable of this environmental transition.

Lauren Michael, a research computing facilitator at the Center for High Throughput Computing (CHTC), says researchers tend to use the CHTC resources for two reasons: they have massive volumes of data or a need for incredibly complex computations.

Bontrager has a bit of both, and uses the CHTC resources for two primary research methods. The first is 16S sequencing. This involves sequencing a region of one gene that happens to be present in all bacteria and using it as a barcode to compare samples against databases of known bacterial strains.

The results can give both a representation of the types of bacteria present and the abundance of each type. Bontrager can compare the diversity of the copepod’s microbial communities in salt water versus fresh water, and see what is lost or gained as the copepod transitions to the new environment.

“It’s DNA sequencing of one gene, but a lot of sequencing of that one gene in a mixed community,” Bontrager says. “It’s not a super computationally intensive part, but I have millions of sequences of 16S DNA and I use the CHTC to query the databases and do some analysis.”

Bontrager and his team have looked at both the copepods themselves and taken samples of the waters they inhabit. Though the research is still underway, Bontrager says the bacterial community on or in the copepod was found to be unique from the surrounding water. Some bacterial strains were present in all copepods regardless of whether they were found in a freshwater or saltwater environment.

Preliminary 16S sequencing data generally shows that saltwater microbial communities have a greater number of bacteria and are more diverse than the freshwater communities. This is true for both the water environment and inside the copepods.

“We take the DNA extracted from many mashed up copepods, sequence everything and piece together the bacterial genomes from this mixed DNA sample,” Bontrager says. “Some of that will be copepod DNA, obviously, but it turns out 60-80 percent is actually bacterial DNA.” 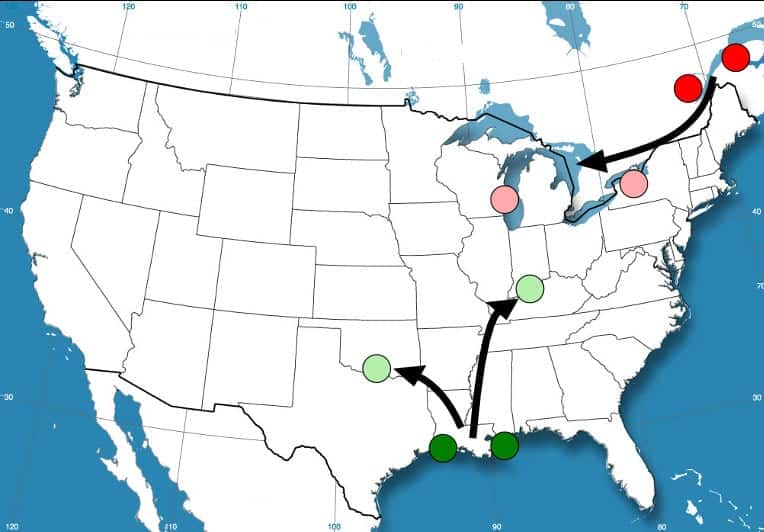 This map shows two independent copepod invasions from saltwater to freshwater in North America. The colors (red and green) represent the two independent events. The darker colors are the saltwater populations and the lighter color their freshwater equivalent. Image courtesy of Martin Bontrager.

Once they have assembled the short fragments of bacterial genome, they can compare them to well known bacterial genes and determine the specific functions being performed by the bacteria in that community.

Assembling the potentially thousands of bacterial genomes present in each sample is a time-consuming process. It’s a ton of genetic data that represents a lot of species all at once, and it takes at least a few days to compute, even when using the CHTC resources. So far Bontrager has about 25 samples to analyze.

“It’s difficult, but when you look at any evolution or adaptation or change in a new environment, you have to look at that whole ecosystem of an organism instead of just the one organism,” Bontrager says.

While Bontrager and others in the Lee Lab think rapid evolution is theoretically an interesting question to investigate, it’s also becoming more and more relevant with the fast changing global climate.

“A lot of species are dealing with rapid environmental change,” says Bontrager. “Everywhere is under some sort of different pressure whether it’s getting colder or warmer or whatever the change is. Climate change is occurring and rapidly.”

While the Lee Lab research may not be able to prevent anything from happening, they could better understand the impact of those environmental pressures.

“It’s hard to know if you can ever translate anything, but maybe there are strategies for managing species under harsh environmental changes that could be more beneficial than others,” Bontrager says.